I've never been a kajal person because it's too black and smudges a lot, but then recently I wanted to try one of the herbal ones because they're supposed to be good for the eyes. I've got very sensitive eyes that turn red very easily, so I thought herbal is the way to calm them down. I actually wanted to try out the Himalaya kajal but ended up buying this instead because it has "Smudge-proof" written on it and also the salesgirl said it sells better (Yes, she convinced me.) 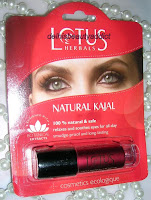 When I opened the outer package and saw this.....

I was happy I chose it. How cute is the packaging?! I think (and so does one other person I know) it looks good enough to cost up to 500 bucks.

It's 100% natural and safe, relaxes and soothes eyes, and also helps in growth of eyelashes Made with botanical extracts of camphor, liquorice and almond oil. 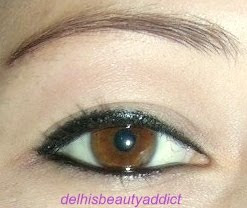 I normally wouldn't apply it this thick, but I just wanted to show its intensity.

Is it really smudge-proof? Not really. But kajals are meant to be soft and smudge-y. I always apply a good amount of loose powder around the eyes to prevent the raccoon-eyed look.

It does feel gentler on my eyes and they sting less, which is why i wear it to bed and clean it all off in the morning.

I'm still going to try the Himalaya one too because I want to compare them both. In case you're wondering, it looks like this... 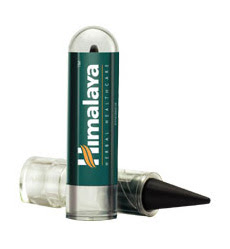 I'm guessing they'll be same, but it's good to be sure.

***Comparison of the two kajals ~ here