Why I DON'T Gain Weight (Anymore) 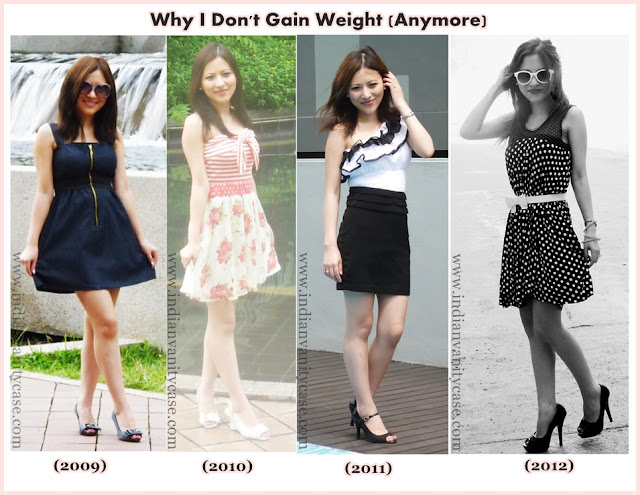 Okay, jinx much? I'll probably balloon up after this post...haha! Thing is, a few people were waiting for this post ever since I tweeted it on Twitter about it a couple months back, and I promised somebody it will be up today  yesterday (such a proper Indian I am!)

Before you read the rest, I just want to say that I'm not obsessed with losing weight. I don't even try, and I can be a real glutton when it comes to the foods I love. Some of the things & tips I list may sound ridiculous, but they're all I know. I will only be telling you what I eat, what I don't eat, and some of my habits, that I do believe play a big part in my weight- or the lack of it.

Then: I used to be very plumpy between my teens & early 20's. Verging on fat during hostel years. My stomach looked like I was at least 2 months pregnant (maybe 3), I had a double chin & plumper cheeks that pushed my thicker hooded eyes further down when I smiled. I could stand in front of the mirror for hours just lifting my top up & sucking in my tummy wishing it were flatter*. I also looked shorter because my body was rounder, obviously. And boy did I eat like a pig! Mountains of rice & potatoes, momos, cheeseburgers, bread pakoras, etc. I couldn't get enough of Vermicelli pudding & mishti doi (Bengali yogurt). My body made me so self-conscious, that I always made it a point to walk behind people, not in front of them.

Now: Now I have that tummy I wished for*. No more double chin , my eyes look bigger, I have cheekbones, my legs look a bit longer. I could be happier with my body, but at least I'm no longer self-conscious, and I don't have to suck in my stomach every time I wear tight clothes.

How? I simply stopped eating. Not because I wanted to lose weight, but because I got bored of food. I remember exactly what I ate during the time I started losing weight: 1 egg & tea in the mornings, tea & tea in the afternoons......dinner after 8. That's it.

Apart from eating less, I have certain habits & foods that I do & don't like to eat:

#1 I Always Smell My Food Before Eating:  A-l-w-a-y-s. I developed this habit ever since I was a kid, because I hated butter, and I was always paranoid it's touched everything I ate. Back then, I had a nickname which basically means "stick skinny". I was a very picky eater.  I remember grown-ups would say "How will you get healthy if you smell everything like that?" But these days, it isn't just the food, I smell the crockery & drinking water, too (esp. in restaurants). Old habits do die hard. I did a little bit of research, and some actually believe smelling food before eating makes you eat less, or something like that... I don't know. I just know that a  lot of old people in my culture believe that smelling food before eating it makes you thin & unhealthy.

#2 I Eat The Hottest Chillies: I cannot live without chillies! I will dip green chilies on red chilly powder and eat it. Some studies have shown that chillies break down body fat, and it could be true. I currently eat the second hottest chilly in the world called Naga Bhoot or Bhut Jolokia, also known as Ghost Chilly & Ghost Pepper. It used to be the world's hottest chilli, until it was superseded by Trinidad Moruga Scorpion (I WANT!) Picture of the ghost chillies below (yes, I took a packet with me to England)..... 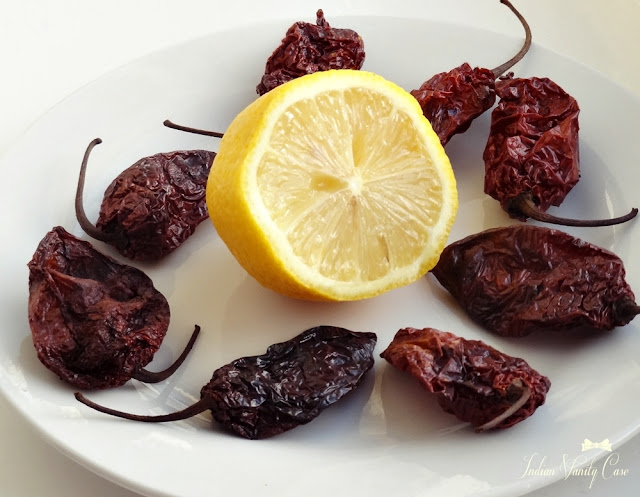 They have been dried up so they have a longer shelf life. Now, you don't eat the whole chilli, you just cut a teeny-tiny piece as small as a grain of rice. That's enough to make you redden if you're not used to hot & spicy foods. Not only is it HOT, it tastes good too - delicious hotness that's super addictive. This chilly grows in the Indian states of Assam, Nagaland and Manipur, and also in some parts of Sri Lanka (where it's called 'cobra chili'.... LOL)


#3 I Eat Slowly: I'm the slowest eater I know. I finish last- everywhere, with anybody! Not because I eat more, but because I'm just that- slow. I think you chew more when you eat slowly, hence you get full quicker? Eat your dinner in front of the tv if you wanna slow down. Btw, I never chewed my food in the past. I remember my school friend would look at me eat my lunch and she used to say to me more than once: "How can you just swallow your food straight away like that?" She, on the hand, would chew a spoonful of food 15 times before swallowing it. Yes, she was thinner than I was.

What I Don't Eat/Drink:

My cousin used to be overweight, and along with crash dieting & red tea + lemon, she took Safi, the blood purifier, everyday. Overweight to slim in a couple of months. But she fainted once while we were shopping, that's why it's not advised. I just think it's worth sharing, because it worked for her & her dramatic transformation shocked everybody. Of course, she had a baby last year and is now double the size she used to be. Sigh, these babies I tell ya =D

What I'm saying is, other people will always find something negative to say, especially about  your looks & body. Funnily, these type of people are usually the most un-fabulous beings. They'll think you're too fat, or too thin. But you know what, if you are happy with your body, it doesn't matter what others think. Look out for b**chy comments masked as concern:

Be Careful What You Wish For:
Unfortunately, there's a downside to dramatic weight loss, and what I personally have to live with:

It's not happening. My weight is stuck at 39-40 kgs, and nothing is getting fatter, because I can't give up the lemons & chillies.... eating chocolates & desserts is like a chore .....and I sniff  before I even realize it!

Hope those tips helped you out in some way. If any of you have your own tips to keep your weight in check, please share in the comments below so others can also benefit from them.

P.S. This was such a long post and I was so tired of editing it in the end, so please excuse any mistakes in the writing if you spotted any =)