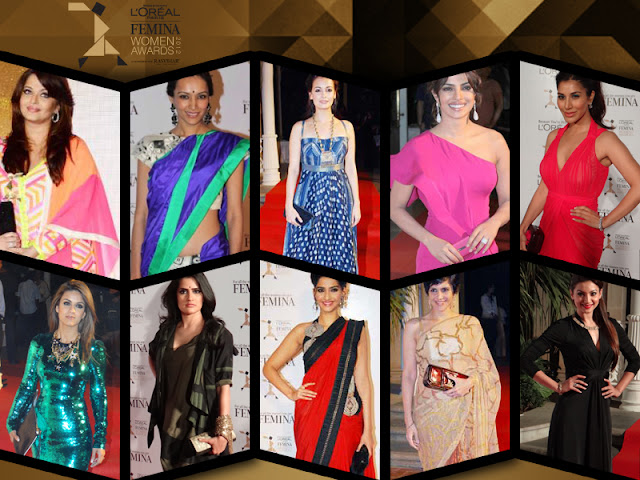 The L’Oreal Paris-Femina Women Awards 2012, in association with Rasvihar, commemorated the most outstanding Indian women achievers this year. Aishwairya Rai, Sonam Kapoor, Priyanka Chopra and other leading celebrities graced this gliterrati studded ceremony, held at the ITC Grand Central on 22nd March, 2012 . In the first year of the awards 19 extraordinary women from diverse fields such as art, music, education, cinema amongst others were honoured.
Hosted by Diana Hayden and Ash Chandler, the evening was brimming with laughter, the audience was entertained by spectacular performances by singers Sona Mahapatra, Usha Uthup, singer-dancer Shiamak Davar and his troupe, who added to the exuberance of the evening.
The star-studded ceremony saw winners including Sona Mahapatra (Music and Performing Arts), Poorna Jagannathan (Breakthrough Performance), Kahini Arte Merchan (Art), Dipika Pallikal (Sports), Dr Firuza Parikh (Science and Innovation), Ekta Kapoor  (Business and Entrepreneurship), Kalpana Swaminath (Literary Contribution), Neelam Chhiber (Social Impact), Alka Shesha (Education), Mansi Poddar/ Kanika Parab (Online Influenser), Kangna Ranaut(Style), Priyanka Chopra (Readers’ Choice- Woman We Love), Ranbir Kapoor (Readers’ Choice-Man We Love) amongst others.
On the award ceremony, Mr Tarun Rai, CEO, WWM spoke highly of the women nominated. He said, “The calibre of the women nominated for the L’Oreal Paris-Femina Women Awards was truly exceptional. While there had to be one winner in each category, I believe they are all winners in their own right. At Femina, we are sure that these super-achievers will be a source of inspiration for an entire generation of Indian women.”
The L’Oreal Paris-Femina Women Awards 2012 gives every woman out there the strength not just to dream but the conviction to work towards making that dream a reality,” adds Ms Tanya Chaitaya, Editor, Femina. With these awards Femina has celebrated exceptional women in a wide range of fields and has once again lived up to its tag line “For all the Women You Are.”