So I've decided to post some of my favorite blog posts, every now and then.


The first one that left a lasting impression in my mind so much so that even 5 months later I still think about it when insomnia hits and laugh under the covers, is "NKOTB" (New Kid On The Blog) by Witoxicity. It is the funniest post by a beauty blogger I have ever come across. I laughed so hard, tears came out. Many thanks to Mara for sharing this post in her blog 5 months ago and in a way introduced me to Witoxicity.
NKOTB ~ by Witoxicity 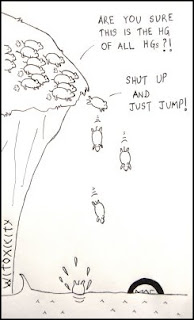 I ♥ that drawing =D
I’m the New Kid On The Blog. I have openly admitted that I’m a makeup late bloomer, so I might as well fess up and say that I’ve been quite a makeup jargon dummy too. Everybody has to start somewhere! Trying to guess the meanings of abbreviations and acronyms in the early days was like a fun sport for me, a kind of mental jogging.


One of the first abbreviations that I came across when I was researching makeup for problem skin last year was MMU. Since the topic was on makeup and not on a university in Manchester, I quickly realised that it stood for mineral makeup. And while on the subject of MMU, have you ever tried EDM? I have bought several products from Everyday Minerals, including its flat top brush which has received very good reviews. It’s really a great face brush……but I digress.
Well, there was also MUA. After circling the internet block quite a bit, I found out that MUA could mean Makeup Alley, the popular beauty community website, and it could also stand for makeup artist, though the latter is sometimes also represented by MA, I think.
“I have yet to find my HG foundation.”
When I first read that in a blog written by this very anxious girl, I didn’t have a clue as to what HG meant. “Is that a brand?” I wondered. “Does it stand for High Grade, a product of superior quality?”
On another blog written by a very enthusiastic female: “MAC MSF is my HG highlighter!!”
[Eyes glazed over]
Thankfully, I came across a forum where someone, unaware that she was doing me a great favour, kindly typed out the full words ‘Holy Grail’. Enlightenment!
I had to Google for MSF though because my guesses were associated with
(a) Doctors Without Borders, and
(b) Microsoft
........Please read the rest here and if you end up wiping tears off  your face, do let her know about it ;)Thanks Witoxicity for letting me share your hilarious post.And before I sign off.....
LOL!!! =D
♥ Cynthia Z ^.^
Posted by Cynthia Z on April 06, 2010

Email ThisBlogThis!Share to TwitterShare to FacebookShare to Pinterest
Labels: Favorites